Bloody Valentine is a Blue Bloods novella, from best-selling author Melissa de la Cruz. If not part of the general story, the book contains three new and exclusive short stories.

It is highly advisable to read this novella between Misguided Angel and Lost in Time, in order not to spoil events taking place before the novella.

Vampires have powers beyond human comprehension: strength that defies logic, speed that cannot be captured on film, the ability to shapeshift and more. But in matters of the heart, no one, not even the strikingly beautiful and outrageously wealthy Blue Bloods, has total control. In Bloody Valentine, bestselling author Melissa de la Cruz offers readers a new story about the love lives of their favorite vamps - the passion and heartache, the hope and devastation, the lust and longing. Combined with all the glitz, glamour, and mystery fans have come to expect, this is sure to be another huge hit in the Blue Bloods series. 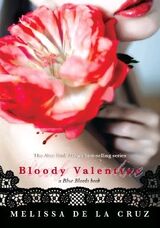 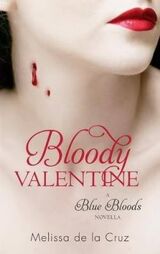 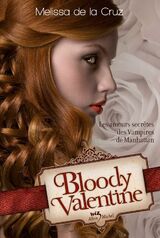 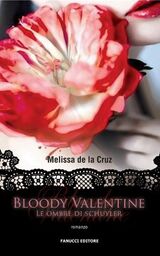 Italian cover
Add a photo to this gallery

Retrieved from "https://bluebloodsuniverse.fandom.com/wiki/Bloody_Valentine?oldid=14275"
Community content is available under CC-BY-SA unless otherwise noted.